Bringing the world to life through augmented reality 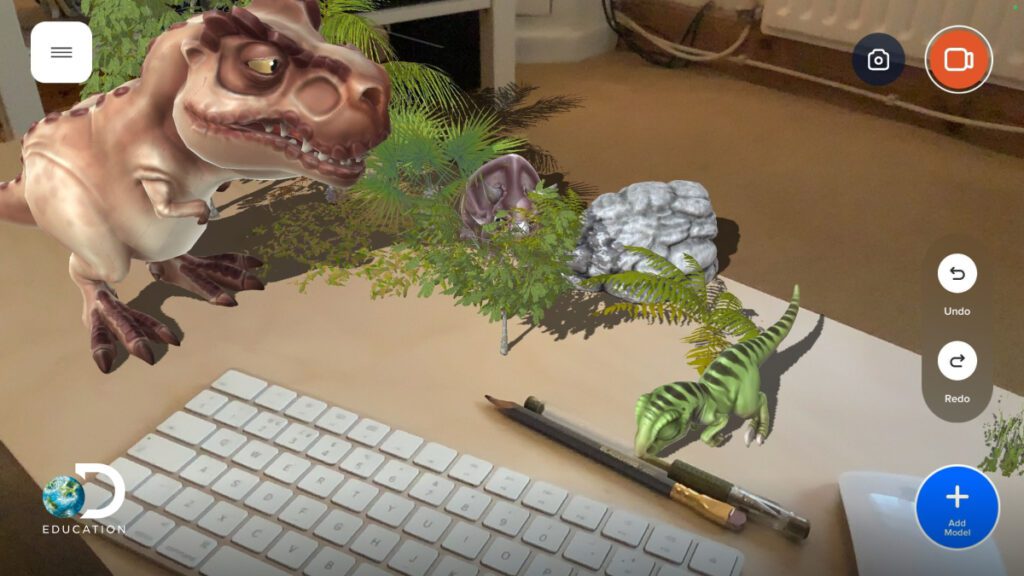 This post was written by Simon Pile, an Apple Distinguished Educator and Deputy Headteacher at Anson Primary School, London. It first appeared via eschoolnews.com on 28th January 2022.

My school, located in London, is a rich and diverse community with over 40 languages spoken. We serve students who have never been able to visit – let alone step inside – the iconic landmarks like Wembley, Buckingham Palace, or the Tower of London, in their own backyard.

This fact was brought home to me several years ago when a 10-year-old student from Brazil, whom we will call Lucas, made a sobering observation on a school trip to center city London. Looking up at the glass, the skyscrapers, the abundance of wealth, Lucas casually remarked, “I didn’t know London could look like this.”

In that moment we knew we were failing our children. If our neighbourhood of Cricklewood in North London was all they knew, how could they have aspirations beyond it? It was augmented reality that began to bring the world to life for our learners.

Here are a few ways we have created moments of awe and wonder for our learners:

CONNECTING THE WORLD AROUND YOU

Augmented reality gives teachers the opportunity to bring the world to life. But first we need to see the world. We enrich our learning by taking field trips to the heart of our capital city. Pupils draw landmarks, interview tourists, use iPad voice recorders and make films using the camera on iPad, editing them in iMovie to bring those landmarks to life.

Then, using augmented reality apps, we link the children’s artwork to their videos and embed it all in a Google Map. This means that anyone can point their camera at the trigger image and find out more about the landmark they are visiting that day–all narrated by our pupils.

Simple point and tap triggers mean any image can be brought to life. Displays suddenly become interactive, with videos, websites, sound files, and animations popping off the walls. Imagine a display board full of children’s written work coming to life with pupils reading their own work.

Plus, it is not just for the children in the school. By posting an image on a school website, you give the children an audience in the community, or even globally. Anything can be a trigger. The school logo provides information to parents and newsletters leap off the page. A book in the library becomes an interactive recommended read.

But as technology developed, so did the capabilities.

Let us revisit Lucas. Without a doubt, he got to see London and learn about the rich history of the city, but the best part of the whole experience was being inside St. Paul’s Cathedral or standing outside Buckingham Palace. These are the moments of awe and wonder that inspire future architects, historians, readers, and writers.

Today, augmented reality is all about those moments of immersion. In the middle of a global pandemic, it is an opportunity to get children to explore the world around them and immerse themselves in history in the most creative of ways. When field trips stopped, the field just came to us.

At Anson, the students walked out of their classroom and into the playground. With a quick scan of the play area using their iPads and Sandbox AR from Discovery Education, the ruins of a Roman Villa appeared before them. They moved around the ruin, exploring the walkways, ducking through doorways, and finding artefacts that were not from that period of history. Importantly, they could begin to understand how our Roman ancestors built a life and easily add their own walls, windows, and archways to develop the experience. When it came to writing about Rome, this experience gave them something to write about. Learning was no longer abstract, but real, lived, in their memory.

There are some who argue that augmented reality is a gimmick. It is certainly true that, for a long time, augmented reality experiences were time-consuming, difficult to create, and ‘clunky’ to use. They were a bolt-on.

This began to change when the London Grid for Learning began to embed augmented reality experiences in its web portal. The London Grid for Learning are a charitable trust whose mission is the advancement of education, and they were leaders in using augmented reality to give access to rich online content that allowed you to experience life for Great Britain’s Roman settlers or the trenches of World War I. Teachers could see it as critical to historical enquiry–a way to ensure learners build understanding and empathy at the same time and connect with experts in their field.

Augmented reality has continued to evolve. Today, thanks to a host of modern technologies, AR puts into students’ and educators’ hands the ability to create immersive, interactive learning experiences that unlock students’ natural curiosity. Imagine my delight when children as young as 7 were able to use Sandbox AR to construct their own version of the Great Hall from the epic poem Beowulf using a selection of structures inside the application. In just 20 minutes, students can walk around their creations, hearing the poem being read aloud as they are immersed inside the mythic meeting hall.

AR provides so many options across the curriculum, from using a giraffe in your classroom to explore ratios, from encountering a shark in your corridor to explore length, or taking a trip around the universe to explore if there is life “out there.”

Importantly, we bring the life that is out there into the hands of our learners. We connect them with the world outside their local area–places many may never experience first-hand. Using immersive technology, we can allow them to see it, hear it, live it, and breathe it all in. We open their eyes to the possibility that there is more to life beyond their own front door.