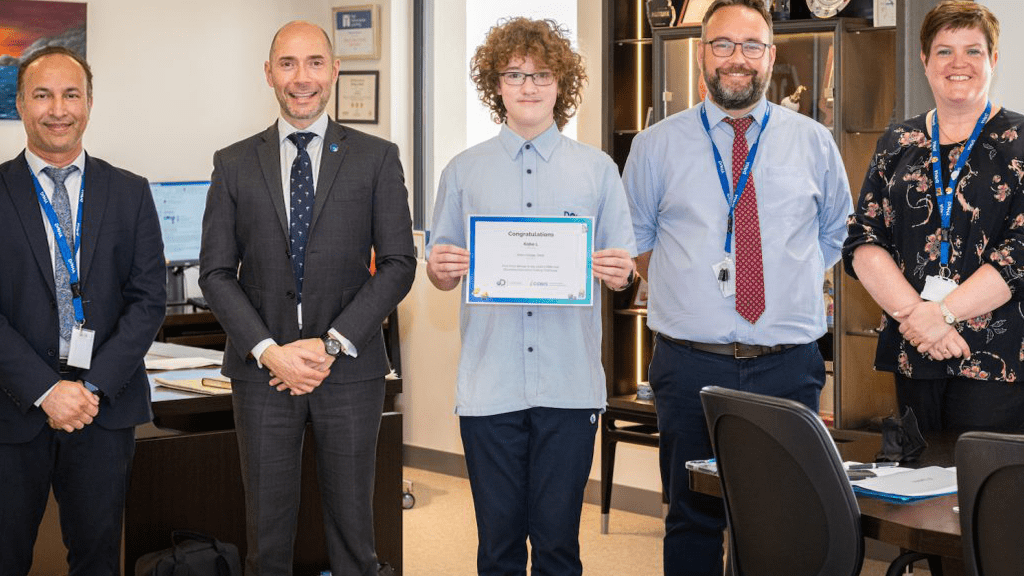 Now in its third year, the prestigious challenge invites students aged 5-12 to unleash their creativity by designing an app using Discovery Education Coding – the award-winning resource for primary schools. Open to COBIS member schools in 76 countries, the competition reaches over 165,000 students globally.

The theme of this year’s competition was ‘A Difficult Journey’ and students taking part were encouraged to create an app simulating a quest. The judges were highly impressed by the wide range of entries and the programming skills shown by entrants as young as 5.

The 2022 winner is 12 year old Kobe, a Year 7 student from Doha College in Qatar. Kobe’s winning app was ‘Fit the Gap’ – an impressive block coding game which sends players on a journey in search of a missing star. The user-friendly app was described by the judges as “sophisticated and mature” with a “very professional and authentic design.”

Kobe said: ” I am ecstatic that I won the COBIS App competition, I didn’t believe I could do it, I thought I had a small chance of winning second or third prize, but never imagined that I would come first! My game was based on games like Tetris that I love playing in my free time. I finished the game with only a few hours to spare and I didn’t think much of it. After a while, I had almost forgotten about it, I even wondered if I had submitted it correctly, then I got the email that I had won, and honestly, I’m surprised out of my wildest dreams!”

Kobe’s teacher Ruhul Chowdhury said, “We are very pleased to learn that Kobe has won first place. We would like to thank COBIS and Discovery Education for giving our students an amazing opportunity to participate in this event. It provided them with a platform to create an app based on the theme given. I believe all our students should learn how to create apps, and other digital products and services by learning to program. They need to become creators of technology rather than just the end-users.”

The second place winner was 12 year old Ojas from The Arbor School in Dubai. Ojas’s winning app was ‘The Adventures of Indiana Jones’ – an exciting game in which players search for missing treasure. The game was described by the judges as “exceptionally well designed and authentic.”

Ojas said, “Discovery Education Coding provides an amazing platform for the students’ interest in programming and STEM. It is an honour to learn and compete with the best and brightest of students across the world. My game program was based on the adventures of Indiana Jones where I attempted to combine fiction with joys of programming. I am really thankful to my teachers at The Arbor School who have always taught me to go that extra mile.”

The third place winner is 11 year old Gosha from English International College in Marbella, Spain. Gosha’s winning app was based on Minecraft, with 3 levels of exciting play. The highly creative app was described by the judges as “complex, inventive and really immersive.”

Gosha said, “I loved participating in this year‘s coding competition. I love coding and my teacher, Mr Carlos. Coding is very important to me and I want to be a programmer of games when I grow up. I worked really hard on my game and I’m really proud of myself for achieving this award.”

The three winning students were presented with their certificates at special school assemblies this week. First prize winner Kobe also received a $250 Amazon voucher, with the runners-up Ojas and Gosha receiving $150 and $100 vouchers respectively.

“As a student-centred organisation, we are committed to offering enriching opportunities for students worldwide, and so we were delighted to partner with Discovery Education to deliver our third Coding Challenge for students at British international schools. The competition allowed students as young as five to learn how to code and develop valuable skills such as problem-solving, computational thinking, digital literacy and creativity. It was fantastic to see so many students take part, and we were once again blown-away by the impressive talent that the competition showcased.”

“Today’s students will do jobs that we can only imagine, so it’s vitally important that we equip them with future-ready skills. Discovery Education is delighted to partner with COBIS to deliver the Coding Challenge to British international schools for the third year running. The competition helps teachers to introduce coding in a fun and accessible way, encouraging a love of computer programming in children from an early age.”

Discovery Education is the global leader in curriculum-aligned digital resources, engaging content, and professional learning for primary and secondary classrooms. Through its award-winning digital textbooks, multimedia resources, and the largest professional learning network of its kind, Discovery Education is transforming teaching and learning, creating immersive STEM experiences,and improving academic achievement around the globe. Discovery Education currently serves approximately 4.5 million educators and 45 million students worldwide, and its resources areaccessed in over 140 countries and territories. Inspired by the global media company Discovery, Inc., Discovery Education partners with local authorities, academy trusts, schools and like-minded organisations to empower teachers with customised solutions that support the success of all learners.